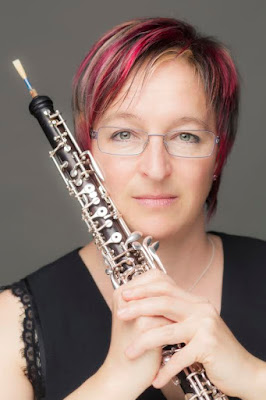 Sarah Roper was born in New Zealand but was already living in England by the age of three. She grew up in Gloucestershire before attending Chetham´s School of Music in Manchester and then went on to the Royal Academy of Music, London, where she studied the oboe with George Caird and Celia Nicklin, whilst reading music at London University simultaneously. At the RAM she was awarded the Robert Rendell prize.

Sarah is Principal Oboe in the Real Orquesta Sinfónica de Sevilla since 1996. She held the Associate
Oboe position in the Orquesta Ciudad de Granada, Spain 1995-1996. She has performed and recorded as Principal Oboe with Klangforum, Vienna and orchestras in Spain, Germany, New Zealand ( Associate Oboe, Auckland Philharmonia 2008-2009) and the UK (BBC Philharmonic, Halle Orchestra and the Royal Scottish National Orchestra).

She is a founding member of the chamber music groups Sevilla Wind Quintet, Sono Reale, Cuarteto
Emispherio (“Quartets for Oboe and Strings” CD with www.oboeclassics.com), Trio Ágora and Trio
MeSaMor which perform regularly in festivals throughout Spain. As a recitalist and soloist with orchestras, Sarah has appeared in the UK, Austria, Germany, Spain, Italy, Hungary, Czech Republic, Japan, USA and New Zealand.

Sarah, a passionate teacher, is regularly invited to give master classes during international summer
courses and at music schools such as the Staatliche Hochschule für Musik and Darstellende Kunst in
Stuttgart and the Royal Academy of Music in London. She collaborates with local youth orchestras such as the Youth Orchestra of South Spain (OJA) and has written articles for the British Double Reed Society, IDRS and AFOES magazines. She is a founding member of the Seville Double Reed Society, Asociación de Doble Caña de Sevilla, holds the International Relations post in AFOES and has recently been appointed as Second Vice President of the IDRS.

Sarah is an Associate of the Royal Academy of Music. She plays a Howarth of London oboe.